The Zombies of Generation Y

Sarah Pride
We walk among the living dead.

A few weeks ago, something odd happened. Odder than normal, even, which for me is saying a lot.

I was enjoying silent solitude around dinnertime in the free weights section in the gym of the college where I work, when a whole crew of muscular young men breezed in. They immediately descended on the bench press. I stood to put away my dumbbells. When I turned back, one of them had occupied my bench!

I did a few sets of crunches, keeping my eagle eye trained on my bench. The guy seemed to have planted himself and put down roots. Finally, I walked over.

He stared straight past me and launched into several more grunting reps.

“How rude!” I thought. And then I saw them. Wires dangling from his ears. I looked around the room. All the young men’s ears had wires. Every one. I decided to try an experiment.

“Hello!” I shouted into the silence.

Nobody even twitched. A little shiver ran down my spine, and I goggled over my shoulder. It was exactly as if … as if … I had stepped out of reality and into a zombie movie.

Think about it. Many movie critics claim that the specific kind of horror flick a culture chooses reflects its collective fears projected on a larger scale. Zombie movies are currently “in” again. And what happens in a typical zombie movie? Technology gone awry spreads a terrible disease that swiftly infects the entire world, turning millions into mindless undead who want to eat the flesh of the healthy. The slightest contact with a zombie is often enough to spread infection. A small band of comrades fights for survival against the entire world, jettisoning most of their number one by one, as each contracts the plague.

I thought about it. Hadn’t I seen what could easily pass for a zombie shambling down the sidewalk in D.C. in front of me just the other day, pants almost sliding off his skinny hips? He wandered alone in a sea of faces, plugged in and purposeless, ear bud wires dangling from his head and a vacant expression on his face.

Or what about at the gas station yesterday? An older male zombie wearing a headset wandered through, mumbling meaningless words into empty air. Or in the middle of her family at IHOP on Sunday, a blond one with spiky hair stared into her cell phone with glassy eyes.

Let me take a break to say yes, I do know we are not actually living in a zombie movie. None of these people are going to start chomping flesh. They’re just folks who have gotten a little too dependant on their tools. But the analogy still applies.

For example, I notice a certain helplessness with which we succumb to the plague/onrush of technology. Consider: phones. One of my friends recently bought a new smart phone. I asked her why she purchased it.

“The circle was getting smaller,” she said. “Larry had one. Moe had one. Curly had one. So I bought one.”Names changed to protect the innocent.

In other words, she didn’t really have an option. She had to buy a new gizmo. All her friends had “infected” her.

It happens with all kinds of technology — the machines can make our lives so much richer, but at the same time they force us to make the same, cookie-cutter choices. For me, it’s the work I do with film. Right now, I own a MacBook Pro in order to edit video with Final Cut Pro, the industry standard. Video technology is advancing, and suddenly everyone is shooting in high definition (HD) instead of standard definition (SD). I have discovered that my current MacBook Pro doesn’t have a fast enough processor to handle the richer footage conveniently. In no more than a year or two, I will have to upgrade.

I don’t want to buy a new computer. I am not in control of my own destiny, using my power as a consumer, when I go ahead and cough up the money. No. I am a pawn who truly doesn’t understand why SD isn’t good enough to tell a story. Everyone else has decided those extra pixels will change lives.

Perhaps the teenager scrambling for the latest phone isn’t as delightfully happy as the advertisements claim. Could be that his parents are still getting divorced, he is still wondering what it means to be a man, and he is stark terrified that he doesn’t have a clue what life is about.

In an article from a 2004 forum at Calvin Theological Seminary, Ron Nydam summarizes the heart condition of “Generation Y”:

Many young people today don’t feel guilty; they feel empty…. The primary spiritual struggle of Generation Y is about mattering: mattering to someone else, to oneself, and ultimately, to God.Nydam, Ron. “Relating ‘Cross-Culturally’ to Generation Y.” Calvin Theological Seminary Forum 11.2 (Spring 2004): 9-10. https://internal.calvinseminary.edu/pubs/forum/04spring.pdf

While previous generations typically struggled with feelings of guilt and their need for atonement, Nydam argues that “guilt, when it is experienced, is an achievement for many young people…. In this we see the beginnings of the ability to trust and experience empathy, as well as a foundation for meaningful relationships, including a fuller relationship with God.”

Small wonder that zombie movies resonate with my generation. As a group, we grasp vaguely that something is terribly wrong with all of us — before Christ, we are indeed the walking dead. But note the untruth — in zombie stories, the victims are passive. They are not responsible for being infected. In real life, in contrast, we are all sinners, “without excuse” (see Romans 1).

I have great hope for my generation, nonetheless. I’ve suffered my own forms of digital addiction, from movie-watching to Internet use, and yet I’ve seen God change my heart in dramatic ways. Everything, including technology, can become a means to love other people better. But when I find the plethora of good tools around me is disconnecting me from others instead of connecting me, like with the guys in the weight room, it is time to moderate my use.

Even the genre of zombie movies demonstrates the hope others have for my generation. Unlike other brands of horror flicks, recent popular zombie films share the notion of a healthy paradise in another, far-off location. The 2007 Resident Evil: Extinction continues the story of an evil corporation situated under the fictional city of Raccoon that unleashes a mutating virus. A few survivors follow distant echoes of hope to Alaska. In I Am Legend, also released in 2007, a man who thinks himself the sole human left alive in a world of zombies eventually finds a young woman and her brother and sacrifices himself in order to send them on to a safe, pure haven.

If these movies provide an insight into the psyche of my generation, they show that we may comprehend deep down the sheer mindlessness of the life dished out to us by the “big corporations” around us. At the same time, buried even deeper, we know there is more to life. Somewhere, somehow, Paradise exists.

If I could tell my generation one thing, I would tell them that they need to look for Paradise, but not on earth. They need to find it in the Person of my Lord, Jesus Christ. He has provided a center and a hope for every age, and this one is no different. As Nydam writes,

Jesus … tells his disciples why he gave up the splendor of the fellowship of heaven and why he emptied himself ultimately on the cross at Calvary: so that we here on earth could enjoy pleroma, the fullness of life in abundance. Living a life chock-full of meaning.

Since we serve a living and active God, there are places on Earth right now that give just a taste of Heaven. The Church, a network of believers stretched across the globe, through the last two millennia, and into the future, often lets us catch a glimpse. Although imperfect, this “catholic” Church is God’s hands and feet now. Its job, and ours, is to spread God’s love.

I recall the 2007 NEXT conference, a gathering of thousands of teens and 20- and 30-somethings, feeling a huge room shake with the melody of “Oh, Happy Day!” I had met one of my best friends in Louisville, and we looked at each other, daring each other with our eyes. We jumped out of our seats and danced in the aisle, joining hundreds of others in utter abandon, hands in the air. It was crazy. I’d never done anything so publicly wild before. But it was beautiful. I’ll certainly forget most of those hours I’ve spent on Facebook, but I will never forget those minutes in Kentucky.

Just think: When this job of earthly life is over, we’ll be dancing for eternity.

Meanwhile, we walk among the living dead. In a world of people who fear to provide the touch of relationship, we who walk in love can overcome that fear. Our job right now, in this time and place, is to walk alive and unplugged enough to have eyes open for friends in need and ears ready to listen. This is the world’s need; and here, in Christ, we will find deep meaning.

As for you guys in the gym, if you ever read this, it’s OK. I did pushups instead, and then I wrote this article. And next time you find me with my ear buds in, you have my permission to remind me of my own words. How to become a minimalist without creating an idol out of “nothing.” Body Shame and the Imago Dei

Every human being, every body, is deserving of respect and dignity. Breaking Free From My Lists

After years of working off to-do lists, I have realized that I began to judge the success of my days by how many tasks I checked off my list. 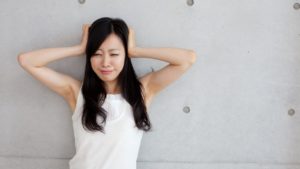 I Want Honest Feedback — But Not Really

It’s considered mature and forward-thinking to ask for feedback. But I have no idea who’s actually doing it, because it’s sure not me or my friends.