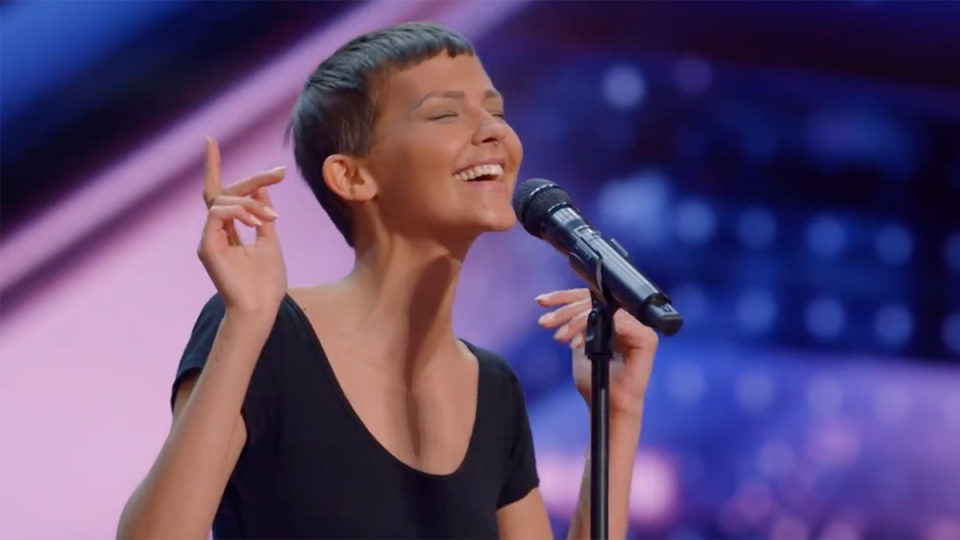 "America's Got Talent" contestant is battling cancer for the third time, but knows God is near – and is telling the world her story.

A few weeks ago, I had an encounter with God through a TV talent show. Along with millions of others, I watched an emotional performance by Liberty University grad Jane Marczewski (stage name “Nightbirde”) on “America’s Got Talent.” Marczewski sang her original song, “It’s OK,” about her difficult journey with cancer and divorce. Her authentic performance earned the coveted “golden buzzer” from Simon Cowell, an honor that sends her straight through to the live performances.

While her soulful voice was impressive, the most captivating thing about Nightbirde was the juxtaposition between her tragic circumstances and her demeanor. The 30-year-old recently learned that her cancer has returned for a third time. Doctors have given her a two percent chance of survival. And yet, hope remains.

“So, you’re not OK,” Howie Mandel said after hearing that she currently has cancer in her lungs, spine and liver.

“Not in every way, no,” Marczewski gently replied. “It’s important that people know I’m so much more than the bad things that happen to me.”

Even Marczewski’s stage name was born out of hope. In 2019, Marczewski told the Liberty Journal how she chose the name “Nightbirde.” Before her diagnosis, she dreamed about birds singing in the darkness for three nights straight. When she awoke after the third dream, she looked out her window and could hear birds singing, which filled her with hope.

“I want to be that way, even when I am in the middle of a dark time and there are no signs that it will end,” she said. “I want to be the bird that sings in anticipation of the good things that I trust are coming.”

Nightbirde’s joy in the darkness is as remarkable as her pain is relatable. I know of many walking through painful circumstances right now. I found these words on her blog describing her complex relationship with God:

“I have had cancer three times now, and I have barely passed thirty. There are times when I wonder what I must have done to deserve such a story. I fear sometimes that when I die and meet with God, that He will say I disappointed Him, or offended Him, or failed Him. Maybe He’ll say I just never learned the lesson, or that I wasn’t grateful enough. But one thing I know for sure is this: He can never say that He did not know me.

I am God’s downstairs neighbor, banging on the ceiling with a broomstick. I show up at His door every day. Sometimes with songs, sometimes with curses. Sometimes apologies, gifts, questions, demands. Sometimes I use my key under the mat to let myself in. Other times, I sulk outside until He opens the door to me Himself.”

Nightbirde’s honesty mingled with hope is what arrested the attention of the AGT judges and audience. In the blog post, she goes on to talk about her mysterious God — the same God who allowed the Israelites to wander in the desert for decades. It was a difficult path, she says, but God was with them every step of the way. A happy ending isn’t the point; intimacy with a good and powerful God is.

I’ve recently been so aware of the reality of darkness in this world. I’ve experienced my share of those wandering-in-the-desert moments where I can’t see or understand how God is working. Who is God when the sick aren’t healed and my prayers seem to go unanswered? Who is God when cancer returns or a relationship dries up or a friend loses a child? On a good day, I can easily talk about God’s goodness, but how do I proclaim that on the hard days?

“Call me cursed, call me lost, call me scorned,” she writes. “But that’s not all. Call me chosen, blessed, sought-after. Call me the one who God whispers his secrets to. I am the one whose belly is filled with loaves of mercy that were hidden for me.”

That’s the striking hope that shines forth from Nightbirde’s life — hope that captivated the nation and has been viewed over 20 million times on YouTube. Even in the darkness, she knows that God loves her. She loves Him. And she trusts all present sufferings will fade in the light of that love. That’s a message I needed to hear.

PreviousHow Do We Live Out Dating Boundaries?
NextWhat’s Wrong With Me?