That Time I Lied and Said Sex Doesn’t Feel Good Although I waited until marriage to have sex, I have no doubt that it still would’ve felt great — at least physically — to do it before saying my vows.

I was the senior class president of Petal High School in 1997, and one of my duties was to make a trip to the middle school to talk about sexual abstinence with the eighth graders.

I was fairly legalistic at the time, and my virginity was one of my favorite signs of my superior walk with the Lord. As I once explained to my mother after she reprimanded me for my lack of self-control over my mouth: “Mom, I don’t drink, smoke, do drugs or have sex. What more do you want?”

So being asked to go to an auditorium full of 13-year-old kids and brag about my virginity was, in some ways, a dream come true.

I practiced quite a lot for the speech, and it all came out just as perfectly as I had hoped — minus one line. With great earnestness, I said, “Let me tell you something: Sex before marriage doesn’t feel good.” Remarkably, no one laughed at this presumptuous assertion, but thanks to one boy in the crowd, I knew I had gone a step too far.

At the very moment the words came out of my mouth, my eyes locked on the boy, who rolled his eyes. And somehow I realized, That kid has had enough exposure at this young age to know I’m full of it.

For any of those eighth-graders who may be reading this today, let me be clear: Although I waited until marriage to have sex, I have no doubt that it still would’ve felt great — at least physically — to do it before saying my vows.

That’s what makes sin alluring; there’s usually something fun about it. But it’s not just premarital sex that feels good. Most sin generally feels pretty good. For example:

Obedience Is About Relationship.

When my children disobey me, they do it because it’s convenient and there’s some reward that’s worth the risk of getting in trouble (if they’re even thinking that far ahead). Basically, it feels good to do it. The problem is, their disobedience comes with consequences.

First, their disobedience breaks down trust between us. My rules are intended to promote order in their relationship with God, other people and me — not to make their lives miserable. And when they disregard my rules, they communicate that they don’t trust me or my authority. Broken trust eventually results in a broken relationship.

Second, their disobedience has consequences. When I ask my kids not to gorge themselves on candy, hit each other, lie to me or talk to strangers, I do so because there are consequences I’m trying to help them avoid. When they disregard my rules, they invite those consequences into their lives, and it breaks my heart to see them pay the price for it.

I don’t disown my children when they disobey me, but I do discipline them out of love. Your heavenly Father will do the same for you as well, and it’s not because He’s some cosmic killjoy.

He’s been around for a while, and He knows it feels good to indulge in sin, but He also knows that the wages of sin is death (Romans 6:23) — and those wages will be paid in your relationship with Him and others. He came that you might have abundant life (John 10:10), so trust that He provides the life He promises, and obey, no matter how great it feels to do otherwise. 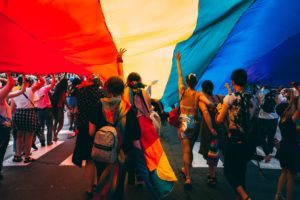