Beyond Being a Bridesmaid 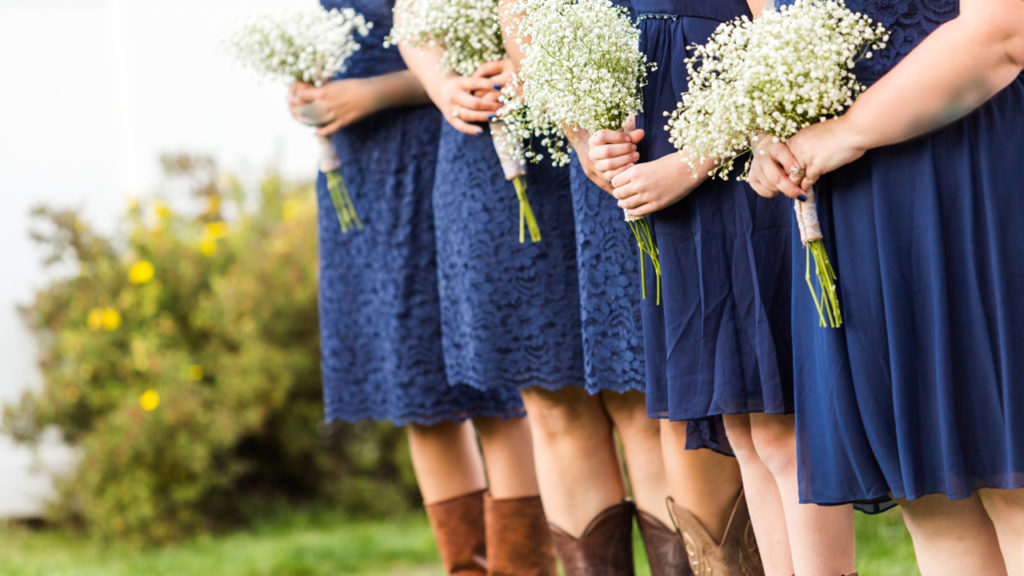 Standing up in a friend's wedding should be about a lot more than wearing a tacky dress and bustling her train. Her marriage may depend on it.

I never thought I would say that I failed as a bridesmaid — I mean, what does a bridesmaid really have to do? Host a shower. Buy bottled water and snacks for The Big Day. Smile a lot. Wear a really ugly dress (consider teal brocade, pastel polka dots that even Reese Witherspoon couldn’t have pulled off, a fur-trimmed velvet suit, and a gold-encrusted, pumpkin-colored get-up that made me look like a decadent Jack-O-Lantern).

But as summer wedding season arrives, and as my dear friend Michelle (not her real name) files for divorce, I am feeling like a failure and reflecting on what it really means when we stand up beside our nearest and dearest friends as they say “I do.”

I’ve been told that you shouldn’t even call your friend during her first year of marriage, because you might be interrupting, um, intimacy.

Here’s the skinny on Michelle: One of my oldest childhood friends, she got married six years ago to a hunky, godly, down-to-earth medical student I’ll call Brad. I think I was the fourth person to know they got engaged. When Michelle asked me to be a bridesmaid, I was thrilled. (OK, half of me was thrilled. The other half of me resented the $150 I knew I’d have to spend on a hideous dress.) I was honored.

Being picked for bridesmaid duty meant I had made the top-tier of Michelle’s friends. I really was one of her nearest and dearest. Dress notwithstanding (it was a pale blue two-piece with white piping, and it might have worked for the Queen Mother), being a bridesmaid was cool. With some of Michelle’s college friends, I threw a casual barbeque to celebrate the engagement. During the next 10 months, I addressed 262 wedding invitations; I listened to Michelle’s endless deliberations about china patterns; I accompanied Michelle and her mom to a big bridal outlet in New York and helped them search out an affordable wedding gown; I went with her for the requisite pre-wedding pedicure; I wrote up the wedding announcement and got it to the local paper in the nick of time; I smiled, but looked hideous, in all the wedding pictures.

Michelle and Brad went to Switzerland for a 10-day honeymoon, and then they sort of disappeared for a year or so. I think they came over to my apartment for dinner twice. Once I saw them at another friend’s birthday party. This was to be expected: I’ve been told that you shouldn’t even call your friend during her first year of marriage, because you might be interrupting, um, intimacy. You should let the bride and groom call you, and you shouldn’t be offended if they don’t — they’re getting to know each other and experiencing newlywed bliss, and they’ll come up for air eventually.

Only when Michelle and Brad surfaced it was to announce, 14 months after they tied the knot, that they were separating.

I supplied Kleenex while Michelle cried. I tried to both cheer her up and suggest ways she and Brad might mend their marriage. I supplied names and phone numbers of reputable couples’ counselors. I prayed.

I always wonder though if I might have done something back when I was a bridesmaid to help avert these disasters.

The mammoth wedding industry supplies us with one description of bridesmaid responsibilities. In The Bridesmaid’s Guerrilla Handbook: Your Step-by-Step Guide Down the Aisle and Beyond, Sarah Stein and Lucy Talbot tell bridesmaids that they are to help address wedding invitations, keep track of who gives what gift at which shower (so the bride can write specific, particular thank-you notes), help the maid-of-honor with the bride’s bustle, and greet guests in the receiving line.

All in all, you need to “accept that for the duration of the engagement your life will take a backseat to The Wedding.” Kate Chenowyth, author of The Bridesmaid’s Guide, tells us that bridesmaids are to “help the wedding love boat sail without snags.” Chenowyth urges bridesmaids to accompany the bride to the salon a day or two before her wedding, and get a lovely manicure and pedicure. You should also be prepared to spend big bucks — on your dress, your hair stylist, your transportation to and lodging during the wedding itself, not to mention the parties you might co-host and the gifts you’ll be expected to give. By these standards, I was an A+ bridesmaid for Michelle.

But is this all that’s involved when our friends get married? Do our responsibilities really begin and end with holding the bride’s bouquet and being nice to her Great-Aunt Edna? It seems to be that we’ve been sold a bill of goods by an industry that wants us to think weddings are just big, fun, expensive parties (and, perhaps by extension, that marriages are all about bliss, and when they stop being blissful, you can bail out.)

I suspect my rethinking of the role of bridesmaid — the role of friend, community, sister in Christ — has come about in part because this summer will be my first summer as a married bridesmaid. My thinking about the role we play in supporting our friends’ and sisters’ marriages is no doubt shaped by the fact that my own first year of marriage was really, really, really hard. Hard, probably, because I’m an independent and stiff-necked person who really did not take easily to the sacrifices and death-to-self that marriage entails. Hard because it had been years since I’d even had a roommate, and simply adjusting to another person taking up some of “my space” was a challenge. Hard because my mother died a few weeks before our wedding, so I was trying to get the hang of marriage just as I was trying to find my way through bereavement.

Like Michelle, I more or less disappeared for a while after my wedding, but I wasn’t disappearing into nuptial bliss — I was disappearing into depression and bleakness. Had it not been for my friends, in particular one dear friend Molly who went around Charlottesville badgering everyone she knew to pray for me and Griff, I’m not sure how I would have crawled out of that bleakness. (Year two, by the way, is much better!)

That hard first year has made me rethink the giggling advice to leave married couples utterly alone during their first year of marriage. Molly’s heroic saintly devoted efforts have made me rethink what our obligations to our married friends are. It has made me rethink our culture’s assumptions that marriages are “private,” that husbands and wives are to work them out as best we can behind closed doors, but never, ever expose the difficulties or hard times to friends or mentors.

It is, indeed, not only the bride and groom’s attendants who have the obligation to uphold the couple in their marriage. In many traditional Christian ceremonies, the congregation — the friends and relatives of the bride and groom — pledge to support the new marriage. “Will all of you witnessing these promises do all in your power to uphold these persons in their marriage?” asks the pastor. And the congregation answers with a hearty “We will.”

So the summer is upon us. I will be a bridesmaid in one wedding this year, and I will attend at least three. I will do all the normal bridesmaid things — wear the dress, get the pedicure. But I will no longer take the responsibility of witnessing marriage vows so lightly, for witnessing a marriage vow is not a frivolous thing. Now, before I attend a wedding or stand up with a friend, I will consider what I, too, am committing to: a lifetime of support, of sometimes hard words, of prayer, of upholding.

As for Michelle, she and Brad did divorce. It was, as these things go, “simple” — there were no kids yet and little joint property to disperse. I’ve lost track of Brad. I think he went to law school. Sometimes I still steam up with fury when I think of Brad and his blasé, baseless behavior. I pray imprecatory Psalms and picture him.

Michelle teaches at a preschool. She has had sad, weepy, depressed months, but God keeps on showing up in her apartment and at her pew in church. She is trying to figure out what she thinks about remarriage — the church hasn’t given a particularly consistent teaching on this. She takes comfort in the knowledge that, whatever she and her community discern about remarriage, she will have another wedding one day, on that great getting up morning when our relationship with the Lord is most fully consummated, and we celebrate at a heavenly feast that the church is indeed the bride of Christ.

Lauren F. Winner is the author of numerous books, including Girl Meets God and Mudhouse Sabbath. Her study A Cheerful & Comfortable Faith: Anglican Religious Practice in the Elite Households of Eighteenth-Century Virginia will be published in the fall of 2010 from Yale University Press. She has appeared on PBS’s Religion & Ethics Newsweekly and has written for The New York Times Book Review, The Washington Post Book World, Publishers Weekly, Books and Culture, and Christianity Today. Winner has degrees from Duke, Columbia, and Cambridge universities, and holds a Ph.D. in history. The former book editor for Beliefnet, Lauren teaches at Duke Divinity School, and lives in Durham, North Carolina. Lauren travels extensively to lecture and teach. During the academic year of 2007-2008, she was a visiting fellow at the Center for the Study of Religion at Princeton University, and during the academic year of 2010-2011, she was a visiting fellow at the Institute of Sacred Music at Yale University. When she’s home, you can usually find her curled up, on her couch or screen porch, with a good novel.

PreviousThe Truth About Your Spouse (Current or Future)
NextKatie’s Choice