Menu
Life With Others Personal Growth Her expression was brave, but I could see the threat of tears.

Here I was, standing in the card aisle at our local grocery store, verbally letting loose my frustration at her. And it was all based on what I’d realize later was a misunderstanding.

Maybe like me, you too can think of a time when you deserved the Austen-esque scolding of, “Badly done, indeed.”

I think most of us look back and wish we’d handled particular situations differently. Because let’s face it, whether it’s in a romantic relationship, a friendship, at work, or in an interaction with a family member, too often we react when instead we should respond.

Is there a difference between the two?

You may be asking: Aren’t the words react and respond synonyms?

Technically, yes. It’s true that for many of us, the only difference we see between the two words is the series of letters that follow the “r.”

It’s also true that if you pulled up the dictionary app on your phone or tablet, you’d see that academically speaking, there’s not a massive difference between their meanings. React is “to act in response to an agent or influence,” while respond is defined as “to react favorably.”

But stick with me. I promise I’m not merely nitpicking about semantics.

You see, when we get to the heart of what each word means in practice, rather than purely on paper, the distinctions become clear. Let’s hearken back to our middle school essay-writing days and do a little good ole’ fashioned compare and contrast. I’ll even include time sequence transition words for old times’ sake.

Plainly speaking, a reaction is whenever we have an emotionally-motivated knee-jerk reply, while a response requires us to practice the wisdom of Scripture. Responses mean we’re quick to listen, slow to speak, and slow to become angry (James 1:19).

Reacting escalates a situation, whether that’s our desired intention or not. When we react, we’re more likely to take a defensive, protective stance, and sometimes that means wrongly assuming the motives of others. Responding, on the other hand, helps us follow the biblical command to do our best to live at peace with everyone (Romans 12:18). Responding requires assuming the best of the other person.

As my story aptly illustrated, reactions often led to regret. Responses, when offered during conflict and contention, can lead to reconciliation.

Why you may react the way you do

What are some common reasons you and I may react rather than respond? Here are five possibilities. See if you identify with any of them.

“His first instinct is to fix whatever’s going on,” she shared with me about her husband. Maybe you can relate. Perhaps you too react to an emotion, problem or difficult situation — whether it’s your own or someone else’s — with an immediate need to solve it. And here’s the thing: You probably have the best of intentions when you do.

Even though there are women I’d label as “fixers,” research indicates that you’re more likely to react with problem-solving if you’re a man. Matt Ehresman in his article “Guys, Shut Up and Listen” confirms that the need to fix is a legitimate struggle for men because of the way your brains are wired.

2. You feel hurt or offended.

Do you ever interpret what’s meant as constructive feedback as negative criticism? I do — all the time! And as a result, I can feel hurt and misunderstood. The need to explain and defend myself quickly surfaces and — Pow! — the defensive reaction erupts.

My personality doesn’t help in this area. While I can’t definitively tell you my Myers-Briggs or Enneagram type, my weaknesses tend toward perfectionism, pessimism and people-pleasing. I care whether people have an accurate perception of me, and I fight to be understood. Your personality might be different from mine, but maybe your tendency to react because you feel hurt is the same.

3. You feel disrespected or challenged.

Sometimes reactions result from feeling disrespected. My friend Tim says, “When I grew up, we were raised to respect authority. Basically, I tend to find a lack of respect for authority annoying, especially if that authority has good foundations.” He shares that when his son disrespects him, he struggles with reacting. “Our confrontations become like a battle of wills.”

Feeling disrespected may trigger you too. Maybe it’s a coworker you supervise who disregards your directions, or it’s a friend on social media questioning your knowledge of a particular subject. Whatever the case, when you experience disrespect, you may find yourself reacting rather than responding.

4. You lack a long-term perspective.

How often have you read a heated thread on social media and been quick to add your opinion to the mix? Or maybe you’ve been upset by the latest societal “scandal” and posted your thoughts immediately. After all, we live in a culture of “share the outrage.”

Reactions tend to be in the here and now. In a knee-jerk emotional state, you’re probably not contemplating how your words might affect your relationship with someone long-term. After all, it’s not personal — it’s just social media, right?

A study by researchers at Tel Aviv University showed that when we’re sleep-deprived, “…we lose our neutrality. The ability of the brain to tell what’s important is compromised. It’s as if suddenly everything is important.” I don’t know about you, but when everything’s important to me, I often react to the wrong things.

When we’re tired — or hungry and stressed, for that matter — it’s harder to think clearly. It’s more likely you may react rather than respond when your body needs rest or nourishment.

The 3 P’s of responding

How can we learn to respond rather than react? Here are three practical steps that may help you.

Instead of reacting, take a moment to be still. If you’re a fixer, maybe that means mentally stepping away from your problem-solving mode. If you’re feeling hurt or disrespected, you might want to take a deep breath, count to 10, and allow your heightened emotions to slowly calm. You may even need to physically walk away from a situation or individual for a few minutes if it’s an option. However, if an immediate response is necessary and you aren’t ready to give a well-thought-out, loving one, consider saying something like, “I need a moment. Can we continue this in a bit?”

What’s interesting is that pausing often serves different purposes for men and women. In her book “For Women Only,” author and researcher Shaunti Feldhahn reports that women are verbal processors who can deal with complex emotions quickly. Men, on the other hand, tend to be internal processors and sometimes need seven hours longer than women to process their feelings. So, if you’re a woman, you may need to pause to ensure you don’t say something you shouldn’t. And, if you’re a man, pausing may help you make sense of the situation.

A quick word of caution, though. Pausing is different from stuffing. The first step of responding well is to pause. Stuffing, though, simply delays a reaction. Stuffers eventually explode. My friend Anna shares that as an introvert, she tends not to react or respond initially. But even she has her breaking point. When she hits it, she often ends up reacting. So, when you pause, do your best to be intentional not to stuff.

You and I don’t have a complete understanding of the situation or individual we’re tempted to react to. God does. So, after you’ve paused, you may want to pray. This might just be a quick mental or under-your-breath petition to God.

The reality is that most situations don’t allow us to set aside a significant chunk of time to pray before we respond. Nehemiah is a perfect example of this. As an exile in Babylon, he was a cupbearer to King Artaxerxes. The king noticed that Nehemiah’s demeanor was sad, so he asked him why and what his request was. Nehemiah writes, “So I prayed to the God of heaven, and I answered the king …” (Nehemiah 2:4-5). He was in a situation where an immediate response was needed. What did he do? He prayed right there and then.

What should you pray for? We don’t know what Nehemiah prayed for at that moment, but we do know that James tells us that when we ask God for wisdom, He gives it to us (James 1:5). I encourage you to ask Him to provide you with insight into your heart and why you’re tempted to react in a particular way. Also, you can pray for Him to help you walk in the fruit of the Spirit: love, joy, peace, patience, kindness, goodness, faithfulness, gentleness and self-control (Galatians 5:22-23). Because we all know that when we’re reacting, it’s tough to do this.

Most likely if you’re ready to react, the situation you’re in already feels very personal. But what “personalize it” means here is to turn your focus away from yourself and empathize — or seek to understand — the feelings of others involved.

Empathizing’s hard sometimes, though, isn’t it? In a recent episode of “This American Life,” a retired Navy officer talks about how his military training conditioned him to put his mission before his emotion. He shares, “You lose a degree of empathy in the military because empathy is not an advantageous skill to have.”

You don’t have to be in the military to struggle with this. It’s possible that your job training, your personality type, or even your life experiences have conditioned you to put whatever your goal is in a situation — whether it’s to fix it, to feel respected, or to get short-term satisfaction — first. If you’re not empathetic by nature or nurture, then you may have to work harder at this.

The fact is, when we attempt to adopt an “other-first” attitude and put ourselves in their shoes, we’re often less likely to react. In my article “3 Ways to Fight for a Better Relationship,” I share how this has benefited my marriage.

The next time you’re tempted to react rather than respond, consider pausing, praying and personalizing it. You may just walk away calmer and more equipped to respond in a Christ-honoring way. And, while there are times when what you’re feeling stays the same, you’ll be able to express it more lovingly and productively.

I wish I’d done this back in that grocery store aisle. But while I can’t go back and change my reaction, I can move forward and learn from it.

Ashleigh Slater is the author of the books “Braving Sorrow Together: The Transformative Power of Faith and Community When Life is Hard” and “Team Us: The Unifying Power of Grace, Commitment, and Cooperation in Marriage.” With over twenty years of writing experience and a master’s degree in communication, she loves to combine the power of a good story with practical application to encourage and inspire readers. Learn more at AshleighSlater.com or follow Ashleigh on Facebook. Ashleigh lives in Atlanta with her husband, Ted, and four daughters. We were created for community. We can’t do it alone. It is beneficial to surround ourselves with a trusted Christian community. 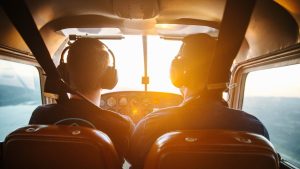 Three Ways to Have Deeper Conversations

As we move past small talk, we will discover the joys and rewards of deep conversation.