How can I talk to my atheist friends about God?

J. Budziszewski
How can I talk to my atheist friends about God?

After a long time away from the church, now I try to live my faith, but it’s turning out to be harder than I expected. My questions are about talking to my two atheist friends. The first one had parents who were atheists. Since he learned everything from an atheist point of view, how can he understand when someone talks to him about God? Another atheist friend is different. He used to be a believer, then he thought “I can explain the world equally well with God or without God, so why not take the simpler explanation — the one without?” I don’t know how to speak about God to him either.

We aren’t trapped in the points of view that we receive from other people. If we were, no one could ever change his mind about anything. God surrounds even atheists with clues to the truth about Himself. If you read Acts 17, you will find St. Paul reminding the Athenians of God’s clues. They were idol-worshippers, yet something told them that none of their idols could save — that there was an Unknown God whom they hadn’t discovered.

Here are some of the clues God has given to your first friend: The creation around him, which testifies to its Creator; the Godward longing deep within him, which nothing earthly can satisfy and the Church itself, which tells him the answer to the question that every heart secretly asks. For years I was an atheist myself. In retrospect, I see that I wasn’t ignorant of the reality of God; I merely deceived myself. I knew deep down that God was real, but I told myself that I didn’t know, because I had decided to live without Him.

Your second friend’s mistake lies in thinking that he can explain the world equally well without God. He can’t. The laws of physics don’t explain love and friendship; the relationship of matter to energy doesn’t explain the difference between good and evil; the theory of natural selection doesn’t explain beauty; genetic predispositions don’t explain the pangs of conscience. What your friend has done is exchange the vast, real world for a tiny, make-believe world containing only the things that he imagines he can explain — all because he doesn’t want God to be real.

Sooner or later, despite all his efforts to shut out the real world, reality will demand entrance. When that happens, he may start asking questions which the principles of his tiny, make-believe world cannot answer. Pray that he will ask these questions, and pray that God will soften the crust of His heart so that he will be able to hear the answers. You and his other Christian friends must be prepared to be Christ’s witnesses when that day comes. 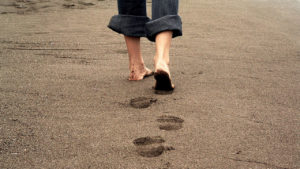 PreviousDoes salvation equal freedom from sin?
NextHow can I tell when someone’s life has changed?